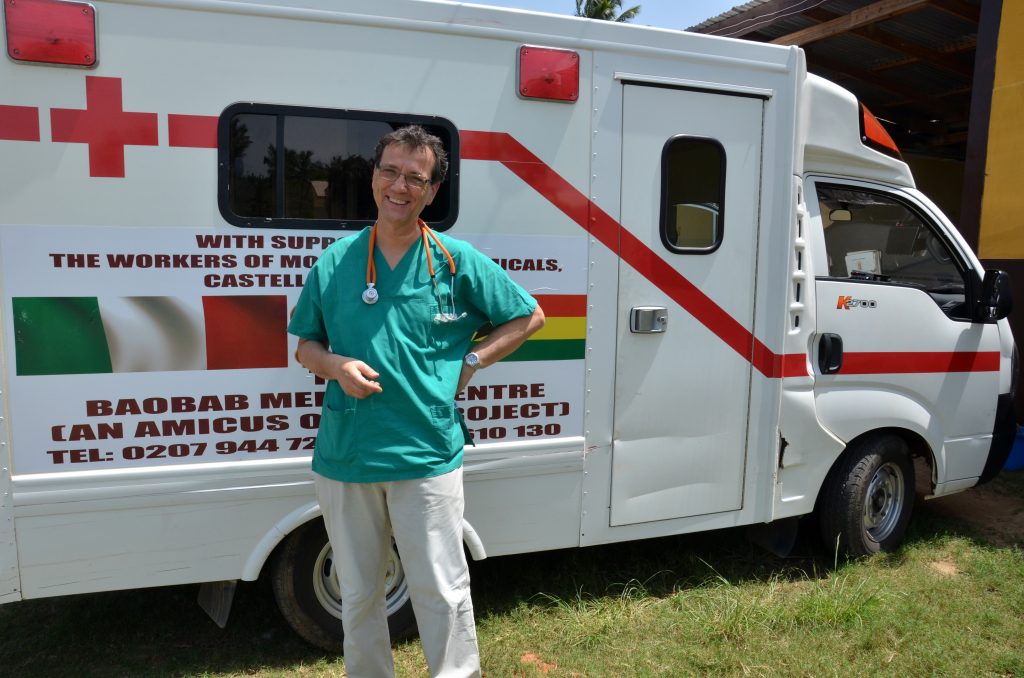 The Ghanaian health system has to deal with many difficulties that arise especially from the country’s lack of medical personnel. According to a report from the Ministry of Health of Ghana called “Official Ministry of Heath Human Resource policies and strategies for the health sector report of 2002” in Ghana there is one doctor for every 16,000 people and one nurse for every 4,300 people. In order to understand the meaning of these figures, it is sufficient to compare them to the Italian context where there is one doctor for every 200 people.

The annual loss of doctors and nurses ranks at 3.7 % and 4.2% respectively. This is attributed to retirement and the exodus of medical personnel from Ghana, in search for greener pastures. The increase in the country’s population and the management of human resources remains the key problem for public health in Ghana. The problem is so severe that the Ghanaian government declared “The government is not able to cover adequately all the medical needs of the population and asks for an increase in the participation from the private sector”3.

In the light of all that has been described, Amicus Onlus, already engaged in programmes for the development of professional training in Ghana, was contacted by the Department for Human Resources of the Ministry of Health, by Dr. Antwi Bosiako, MoH, HRHD, to offer medical assistance and to train nurses and doctors in the country.

Amicus Onlus decided to respond concretely to this need and in collaboration with the Ghana Health Service and the Mfantseman Municipal Assembly, started the Baobab Medical Centre (BMC) in October 2005. The BMC is managed by Ghanaians and with Italian Doctors Volunteering at the Centre throughout the year. The project is located at Biriwa in the Central Region and is about 14 kilometres from the Central Regional Capital, Cape-Coast.

The Central Region has been identified as one of the three poorest regions in the country alongside the Upper East and Upper West regions. By this status, its ability to attract skilled manpower especially in the area of Medical Personnel is very much in the question. The mounting pressure on the few existing health facilities, coupled with the acute shortage of doctors, underscore the need for a project such as the BMC.

The Italian doctors who volunteer at the BMC are selected through interviews by Amicus Onlus, which considers their personal and professional experiences and their abilities according to the local needs in Ghana. The doctors must have a working knowledge of the English language and certain experience of the medical profession in precarious conditions. The turns are organized in a way that when a new doctor arrives at the BMC, there are at least two others who have already acquired some experience with the local conditions and are therefore able to transmit their experience to the new comer.

In situation where Amicus is able to attract specialist Doctors whose services will be needed at larger facilities, such doctors are made available to the Saltpond Municipal Hospital or the Cape-Coast regional hospital, where their services will be felt best.

Among the various services offered at the clinic are: general consultations, minor surgeries, dispensary, maternity and midwifery services, anti-natal and post natal care, medical laboratory services and dentistry. The staff of the BMC also carries out frequent medical outreach programmes in other remote surrounding villages to ensure that poor people are not cut off from accessing medication.

Aside the services, Amicus also has a scheme in place where it receives donated drugs from pharmaceutical companies in Italy and administers them to patients free of charge. The organisation has also commissioned a “needy fund” that is supposed to needy patients have access to good medical delivery even outside the Baobab Medical Centre.

During the 2006 annual review of the project, it was established that over 19,800,000 people benefited from the Baobab Medical Centre in 2006.

Donate Today and Make a Difference

As part of the Baobab Academy’s Community Intervention Program and objective of skills training...

Many single mothers, some quite young, are unable to support their children who sometimes end up...